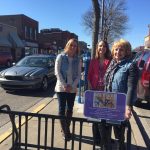 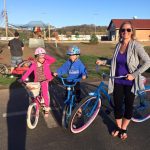 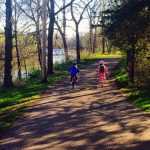 River Falls Municipal Utilities is hosting a Customer Appreciation Event on July 21, 11am -1pm. Donate your old cruiser bike and receive a cool water bottle – bikes will be collected at the event!

More information about the program

Article from the Pierce County Herald

RIVER FALLS — After a long winter — and an even longer transition from that winter to spring — wouldn’t it be nice to take a bike ride with the sun on your back and the rhythm of the road under your tires?

Nice picture, but no bike, you say?

No problem. Blue Bikes are here.

The Blue Bike River Falls committee is busy installing the four bike racks around town that will be at Crankworx at 101 S. Main St.; Our Neighbor’s Place, 122 W. Johnson St.; UW-River Falls near the Kleinpell Fine Arts Building; and at Hoffman Park.

Each bike rack will hold four classic bikes painted blue and one fix-it station. Anyone can borrow a bike for free — just return it to a bike rack.

The Blue Bike program has been about a year in the making.

“I can hardly believe it,” Blue Bike committee member, Deb Lucero said, “the way everyone came together and got on board and believed in this. And the people who have come out and helped have such a passion for biking and River Falls.”

Lucero first saw the “bike share” concept when she was visiting Stockholm with her husband.

“It was so cute and quaint, and I thought, ‘We can do this in River Falls,’” Lucero said.

She had already been on a committee to extend available cab hours and that work was winding down. So she brought the bikeshare idea to the other committee members — Amy Hess, Pierce County; Katie Feuerhelm, UW Extension; and Judy Berg, Chamber of Commerce.

“Everybody added energy and knowledge to it. Blue Bike River Falls has truly been a collaborative effort from the beginning,” Feuerhelm said.

One of those people who helped is Isaac Curtis, owner of Crankworx, a bike shop at 101 S. Main St. He came on board to fix all the donated bikes and is under contract with the city to continue fixing bikes as they inevitably break down.

And although his business survives on customers purchasing bikes, he’s in favor of the free bike program.“Any time there is a culture of biking, it’s good,” Curtis said.

Curtis’ store is located where the White Pathway starts at Veterans Park.

“On that warm weekend a few weeks ago, I peaked out my door and saw a constant stream of whole families on bikes and people strolling by.

“Then a weekend later, I was in a town in Illinois about the same size as River Falls, and I didn’t see a single person on a bike and no one walking.

“It was a totally different atmosphere,” Curtis continued.

DeLucero said once the committee got the green light to go forward with the project, she and the other members had to do a lot of research. She said they visited other cities with similar programs.

“Minneapolis does this but you have to use a card and pay a fee,” DeLucero said. “We didn’t want to do that. We really wanted to keep it simple.”

The bikes are kept simple too.

“Anyone can ride them and they’re easy to fix,” she said.

The Blue Bike Program didn’t pay for a single bike.

Most of the bikes came from a non-profit in Minneapolis called Free Bikes 4 Kidz. Some came from the Pierce County Recycling Center and another group called Bikes 4 Kids.

The group got more bikes than they needed and actually gave away 25 bikes last Christmas season.

Lucero said there are 30 bikes total — 16 will be in the racks, the rest are stored as reserves.

Feuerhelm said she believes the bikes will be used by tourists too.

“I really see people who may just be stopping for lunch, actually staying here longer, making River Falls more of a destination than a one hour lunch.”

Lucero said they are making it easy for tourists too.

At the bike racks, there will be a QR code sticker the bikers can scan with their phones. All kinds of information about River Falls will then show up on their phones including events, restaurants, places to shop and bike trails, and where the other Blue Bike racks are located.

The Blue Bike committee will see how the use of the bikes develops this summer, and if all goes well, the group already has plans for more bikes and bike racks in the future.

Where: Starting at Veterans Park. Blue Bikes will be available to use or bring your own bike. Then ride from Veteran’s Park to Our Neighbors Place, then UWRF, and end at Hoffman Park. At each stop, there will be snacks and drinks and a short talk from a community member. The event is free and open to the public.

We teach, learn, lead and serve, connecting people with the University of Wisconsin, and engaging with them in transforming lives and communities.

Connect with your County Extension Office

Find an Extension employee in our staff directory

An EEO/AA employer, University of Wisconsin-Madison Division of Extension provides equal opportunities in employment and programming, including Title VI, Title IX, the Americans with Disabilities Act (ADA) and Section 504 of the Rehabilitation Act requirements.